The pipes and horns had several purposes in Finland and Karelia in the old times. Actually, they were used in most parts of life. The customs varied depending on the area and time, which makes this presentation a collection of local habits here and there, not any kind of general truth.
As the industries developed, people got wealthier and new influences were adopted at the countryside, the culture of these self made instruments started to lose its significance. In the eastern periferia there were still horns in use in the beginning of 20th century whereas in the west the old music and instruments had been changed into new ones.

the animals into forests to eat, avoiding the private areas. Leading the cattle and scaring the beasts was carried out with the whip and the horn. In the evening the shepherd returned the cattle to housewifes for milking.
– For many centuries ago the wild beasts were a real threat for the cattle, which demanded man-shepherds. After effective hunting, the last centuries of shepherding the job could be easily done by the young children, women and elderly.
– Some shepherds made, in addition to whisks and other things, musical instruments and played with them when the cattle didn’t need any attention. That way they spent time and expressed their loneliness and other feelings. Music was improvised, instruments were often short-lived and tuned in random scales. Sometimes shepherds called for each other with horns to get help, or to contest upon whose horn sounded the loudest.
– Sheep-, cow- and horseshepherds were valued differently depending on the value of the animal and on demandance of the work. The occupation of shepherd was learned as an ssistant. Children who took care of sheep didn’t have the strength to play horns, so they often played flute, which was therefore often called as a sheepshepherd’s flute. In Ingria, shepherds used horsehorns still in the beginning of the 20th century.
– Musically skilled shepherds played not only at their own leaving-party in the autumn, but also dance music at wedding parties.
– Magic and traditions dealing with husbandry varied. The most common habit in the old times was that the housewife let out cattle ceremonially in the spring. In Karelia some mighty shepherds made a deal with the forest elf of protecting the cattle, which also made the shepherd’s horn a magic thing.

2. Other sources of livelihood 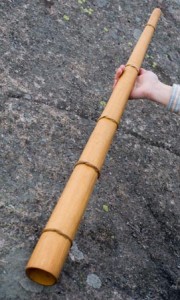 – When a targrave was lighted, the responsible person blowed into a musicalinstrument called the gravehorn. Every targrave in a village used to be lighted in the same evening, which generated musical sounds here and there. The same horns were played if the fire got out of his control.
– The housewife called workers from fields to eat by blowing into a cowhorn.
– Vepsian boys and men used to play wooden clarinets, called luttu, as they were about to harvest potatoes. The reason for this was to prevent evil.
– The fishers gave signals to each other with horns, also fogforns were used.
– Hunters have used various pipes and horns to attract fowl, wild ducks, swans and foxes.
– Forestry workers made little clarinets of cigarette holders.
– Earlier firemen in Ostrobothnia blowed into hooptrumpets to get help in putting out fires.
– It is said that the livonians used to have guards with horns on hills at warlike circumstances. With the horns the messages were  moved fast onwards as signals. 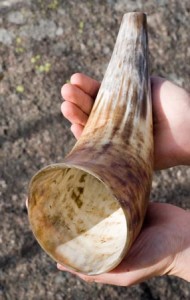 together. Oxhorns were also used as corpsehorns to call villagers to sing, pray and stay awake at the house where somebody had died.
– Young people called each other together by blowing horn.
– A religious sect in Western Finland and Ostrobothnia called a congregation to pray together by blowing a certain prayerhorn as late as in the beginning of the 19th century.
– Stolen church bells were replaced by prayer horns in Southwest Finland.
– Locally people in a churchboat blowed a horn when they arrived ashore.
– It is told that at ancient pagan sacrificial parties the men blowed horns as the priests prayed in a grove.

– In their freetime, children learned to build with a knife various musical

instruments. With selfmade pipes they played and compared their skills with eachother. Sometimes an older men taught them instrumentbuilding during a pause from work. As the children played they learned many useful skills.